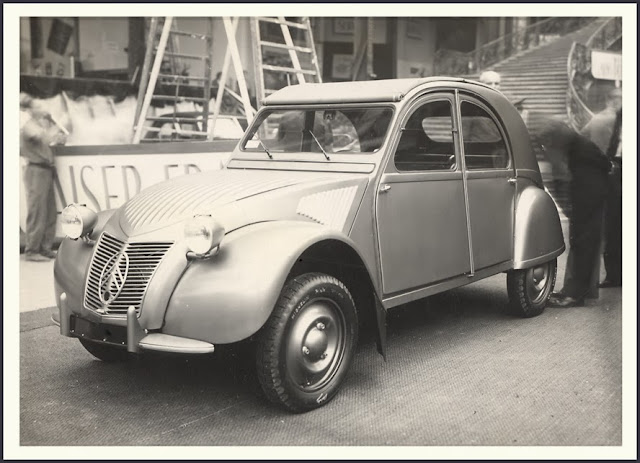 October 1948. Citroën 2CV, the French Model T, prepares for its public debut, with Kaiser-Frazer sign about to be hoisted in the background. I test drove one of these in the early seventies, from a sleepy Citroën garage on Cleveland's West Side. Actually, I rode in the passenger seat, since the vendor alone knew how to change gears by pushing, pulling and twisting the knob on the end of the long rod sticking through a hole in the firewall. Sailing over humped railroad crossings on torsion bars was like swinging in a rubber band hammock, the unfamiliar clatter of the flat-twin bouncing off all the bare metal and glass. Stepping back into an Austin America for the drive home was like stepping from the Austin into my mom's Buick. 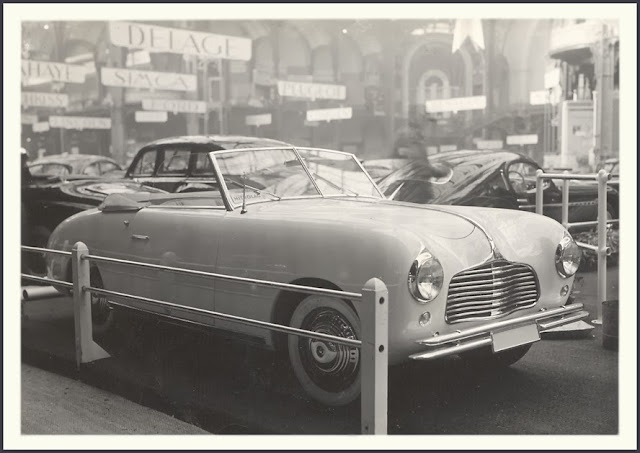 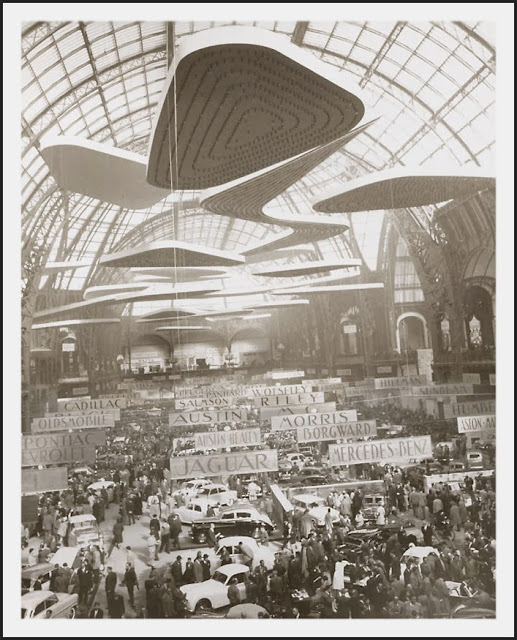 42ème Paris Salon de L'Automobile, Grand Palais, Parc des Exhibition, October 1955. French makes are concentrated just past Wolseley and Cadillac, along the axis of the main entrance indicated by the arch on the right. 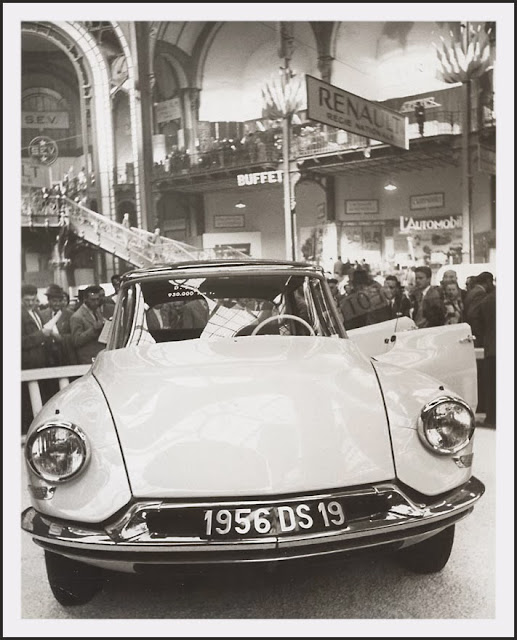 Unveiling of the atom age Citroën DS, another collaboration between Italian industrial designer Flaminio Bertoni and French aeronautical engineer André Lefèbvre, creators of the revolutionary monocoque Traction Avant some 23 years earlier. As philosopher Roland Barthes wrote in tribute, I think that cars today are almost the exact equivalent of the great Gothic cathedrals: I mean the supreme creation of an era, conceived with passion by unknown artists, and consumed in image if not in usage by a whole population which appropriates them as a purely magical object... It is obvious that the new Citroën has fallen from the sky inasmuch as it appears at first sight as a superlative object. 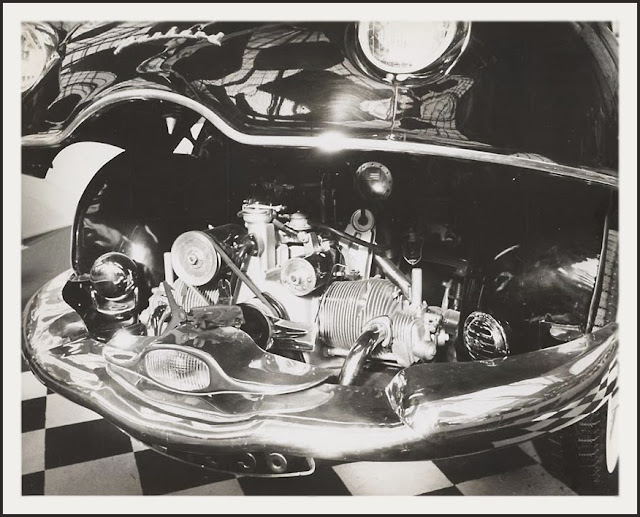 Panhard Dyna Z12. Air-cooled flat-twin, front-wheel drive, torsion bar suspension, bulbous bodywork with a curious fish mouth up front. Just another French oddball. But way back in 1891, René Panhard and fellow engineer Emile Levassor looked beyond the voiturettes of the day - tricycles and horse buggies fitted with under-seat engines, drive belts and pulleys. The configuration they settled on was front engine with rear-wheel drive, their own clutch-actuated sliding gear transmission, the world's first, in between. This Système Panhard would be the standard automobile layout for most of the next century. 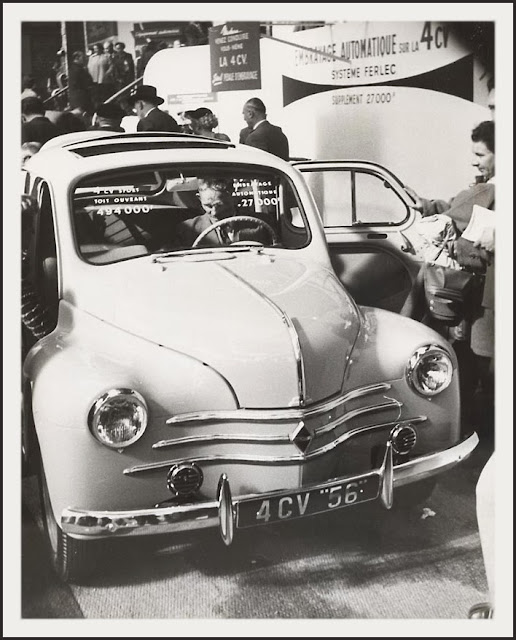 Renault 4CV. Development began in secret during the German occupation. Following Hitler's defeat, Ferdinand Porsche was brought to France as part of a war reparations effort to move the Volkswagen project there. Which facilitated several government-ordered consultations with Renault's development team to offer tips on the handling and weight distribution of his competitor's postwar rear-engine design. Here, one sensible old-timer and his wife window shop as crowds swarm the chic new Dauphine a few feet away. 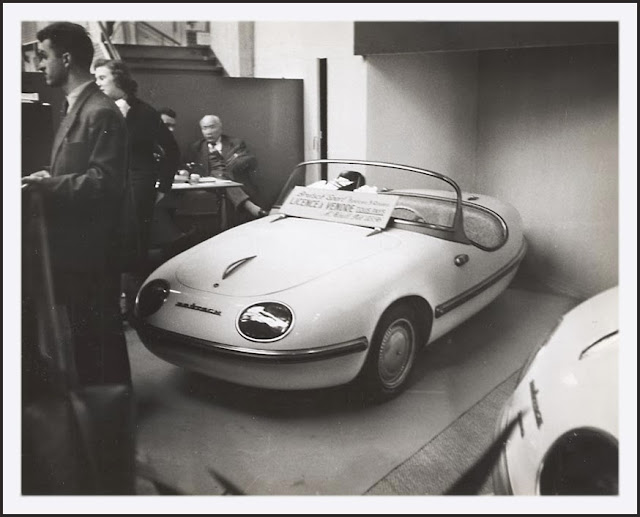 WWII left Europe's auto industry in ruin. Before the factories of the major players were up and running again, small-timers eagerly stepped in to fill the basic transportation needs of weary citizens after years of hardship and uncertainty. Egon Brütsch's tiny three-wheeled roadster, suspiciously similar to the Peardrop microcar French aeronautical engineer Victor Bouffort promoted on a tour through Germany and the UK in 1952, was built from polyester half-shells glued at the waist and powered by the same 191cc Fichtel & Sachs two-stroke single used by Messerschmitt. He built some eleven variants between 1952 and 1958, negotiating licensing agreements with builders in Germany, France, Switzerland, Holland and Indonesia. But Brütsch was an entrepreneur, not an engineer, and his plastic hockey puck had a fatal flaw. Mechanical bits were simply bonded to the bodywork, which meant the vehicle's lifespan could be counted in days. Licensee Harald Friedrich hired Tatra's Hans Ledwinka to make his Spatz variant roadworthy, Jean Avot of Avolette turned to Victor Bouffort, whose design Brütsch had cribbed in the first place. Builders seldom managed to turn out more than a handful of cars before giving up completely, with accusations and lawsuits to follow. In the Spatz case, Ledwinka did a major rework, adding a central tube frame, strut suspension, hydraulic brakes and a fourth wheel. Which led Friedrich to stop paying royalties. Brütsch sued and lost, the judge declaring the original design a menace to society. Whose exhibit space is pictured here? The licensing offer on the windscreen reads Brütsch Sport 3 Places 3 Roues - License à Vendre Tous Pays (illegible). But according to Jan de Lange's Microcars Stories, the cars Avolette displayed at the 1955 Paris Salon were Brütsch Zwergs anyway. 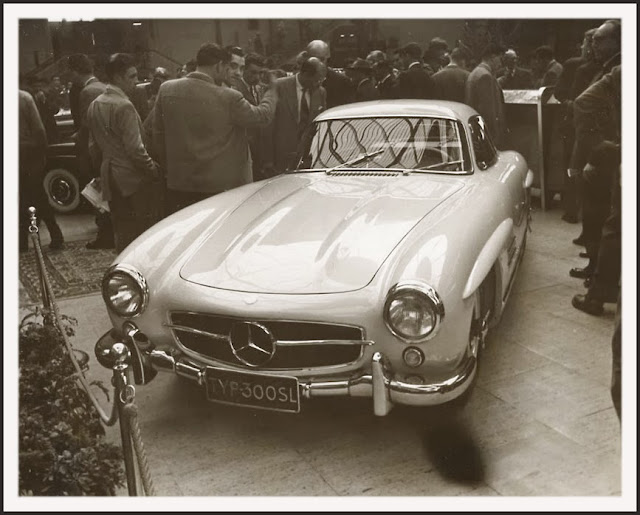 Mercedes-Benz 300SL 'Gullwing' Coupe, an object of desire from a first sight in print or in person. 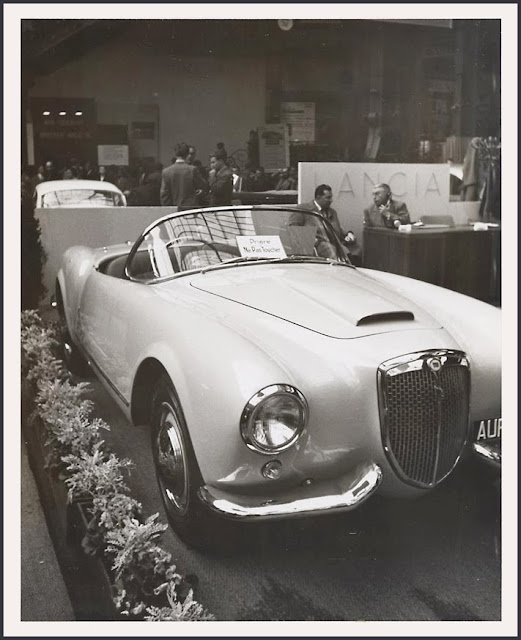 Lancia Aurelia B24S Spider by Pininfarina. Lancia never had much of a presence in the United States. The average American was not interested in spending big money for a small, modestly powered, exquisitely engineered jewel when he could get tonnage and brute force for less. The prospect of global searches for parts and service when something went wrong was likely another deterrent for the level headed. But Lancia's stateside status turned when a pockmarked B24S beater, pulled out of a Northern California garage after a forty-nine year nap, fetched $803,000 at a 2013 Gooding auction in Scottsdale. Gooding has another more presentable example on tap for 2014, carrying a seven-figure estimate this time around. Prière ne pas toucher, indeed. 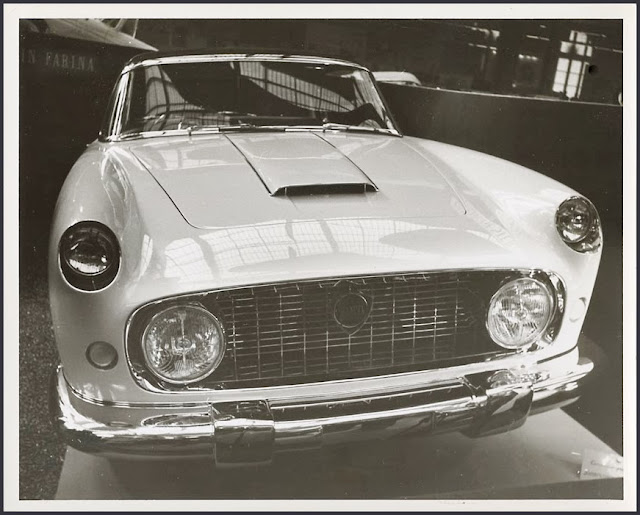 Pininfarina's Lancia Aurelia Florida, featuring crisp straight-through fenders with headlights tucked into the grille, auxiliary lamps where the headlights should be and modest fins out back. The design was widely praised and Pininfarina was soon working up production versions with headlights back in their usual places for BMC, Fiat and Peugeot. Across the Atlantic, the Florida's influence is seen on Elwood Engel's refined 1961 Lincoln Continental. 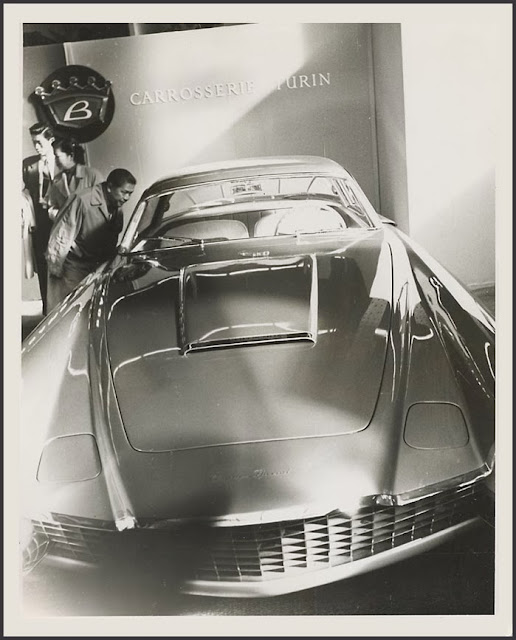 Chrysler Special Corsair II. Hemi V8 power in a Nardi chassis with body by Carrozzeria Boano of Turin, who built the Lincoln Indianapolis that same year. 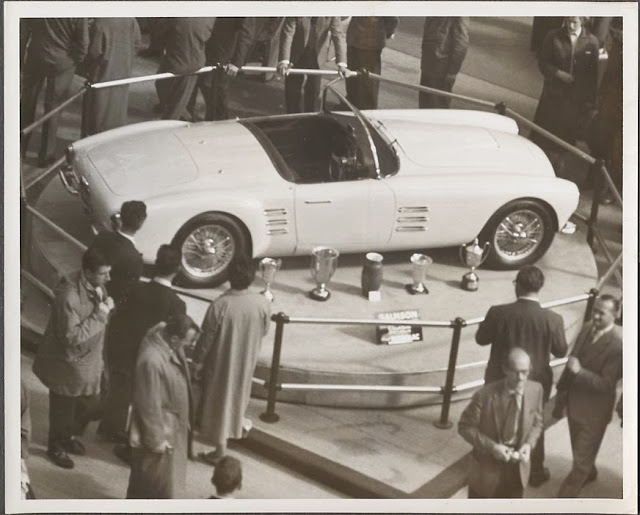 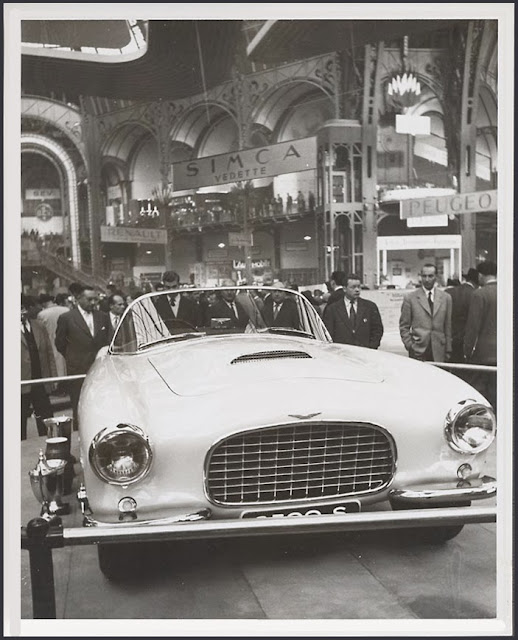 Salmson 2300 Sport LeMans Cabriolet by Motto of Turin, perhaps the prettiest Salmson, unfortunately the last. High sticker price in a struggling economy conspired with a punitive French motor tax rate on its 2.3 liter DOHC 4 to doom the car from the start. Only 227 2300s were sold between 1953 and 1956, when Salmson left the automobile business for good, selling its Billancourt plant to neighbor Renault.
Posted by reservatory at 3:10 PM 2 comments