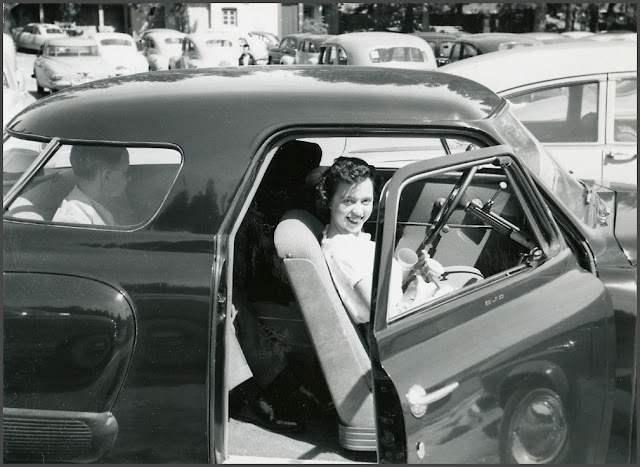 1947-8 Studebaker Starlight Coupe
A thoroughly modern postwar girl in a stylish ride, with Dad back in the turret, enjoying the view. Design was apparently tweaked in secret late-night sessions in Virgil Exner's basement while his associates in Raymond Loewy's South Bend studio worked on the official proposal - Studebaker Engineering VP Roy Cole's attempt to maneuver the flamboyant and expensive Frenchman out of the picture. 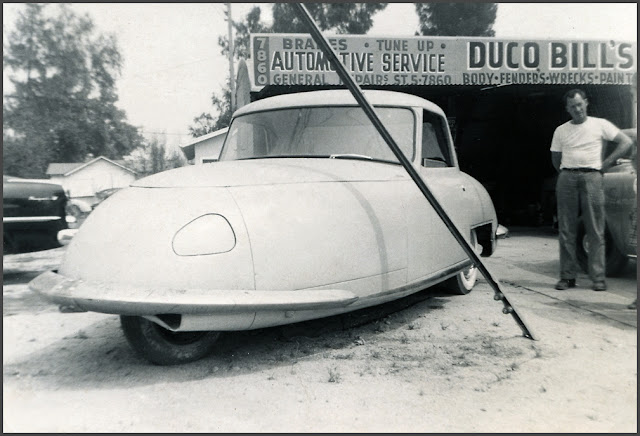 1948 Davis
One Davis Divan of approximately seventeen, in its back-lot curiosity phase, as company founder Gary Davis served out a two year sentence for grand theft and fraud in North County Correctional Facility near Castaic, California. Built in Van Nuys, most were powered by four cylinder Continental engines, although at least one was fitted with a Ford V8-60. 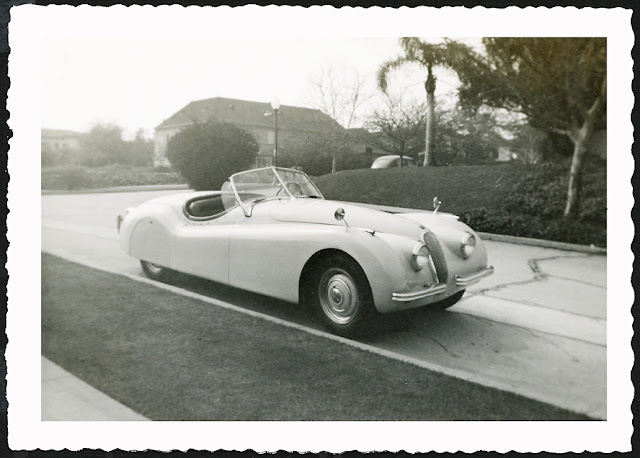 1949-54 Jaguar XK120
William Lyons' luminous pouncing cat in a suitably elegant setting. From Design Museum.org, "In October 1948 Lyons unveiled the Jaguar XK120 – or Super Sports – at the Earls Court Motor Show in London. To the war-weary British public in an era of rationing and the Utility Scheme, the pure lines and voluptuous curves of the two-seater sports car were breathtaking. Equally impressive was the luxurious interior with a walnut-trim dashboard and thick-pile carpet, and the six cylinder engine designed by Heynes and Wally Hassan with a hemispherical head, twin overhead camshafts and top speed of 126 mph. Lyons oversaw every detail of the car’s design, down to the stylishly skinny cross-ply tyres. Sought after by movie stars like Clark Gable, Jaguar sold over 12,000 of the XK120 from 1949 to 1954." 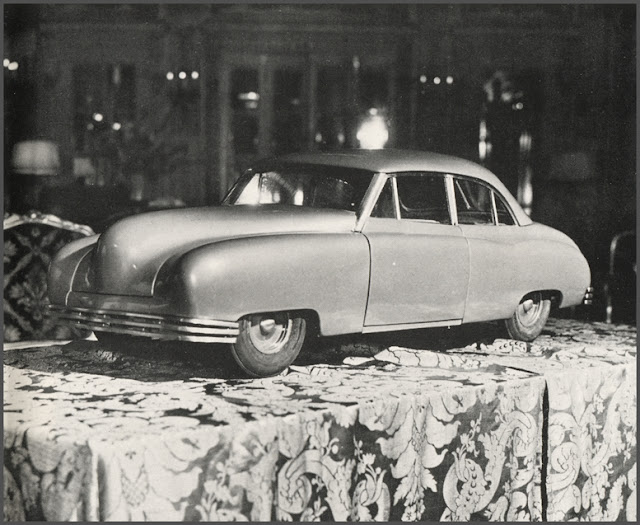 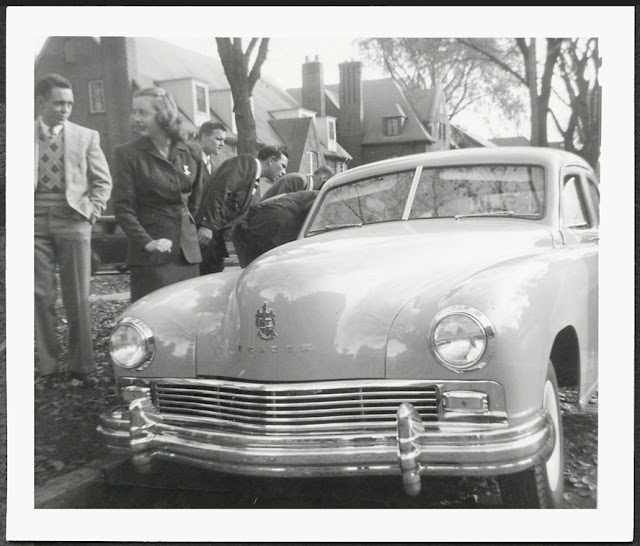 1947-8 Frazer
Frazermania comes to the good street in your neighborhood. Design was taken from a quarter-scale metal mock-up Howard 'Dutch' Darrin cobbled together in 1945 to interest investors in a postwar Graham-Paige. As Darrin explains in Richard M. Langworth's The Last Onslaught On Detroit, "Thinking the scale model was just a stock-seller, I didn't take it seriously. By the time I returned to Detroit it had been built up from full-sized clays into a wooden die model. I even tried to chip away at the thing with some wood tools when I realized how far along it was, but they chased me away."  Instead, alterations came from the engineering firm hired to prepare for production, who raised the roofline and eliminated the gentle arc and dip of Darrin's side elevation, restored to the Frazer, Kaiser and Henry J for 1951. Proposal photo from Langworth book. 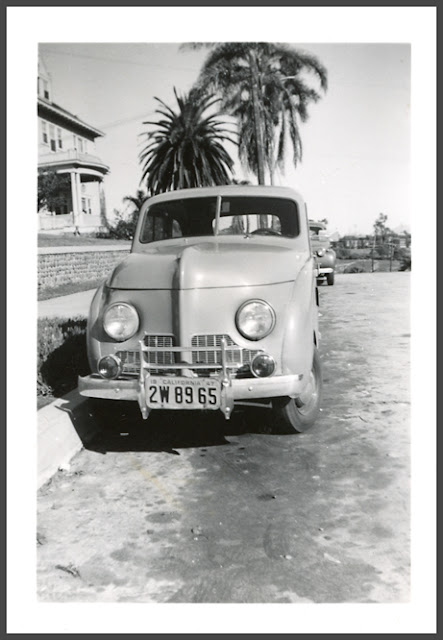 1946-8 Crosley
First postwar edition of Cincinnati industrialist Powel Crosley's pint-sized economy car, originally sold by independent appliance dealers and department stores, huddled against the curb somewhere in Southern California. Its distinction as America's first slab sided production car may have something to do with its manufacturer's experience stamping sheet metal for Shelvador refrigerators. Struggling for acceptance in a boomtown America focused on power and prestige, Crosley stopped building cars in 1952. 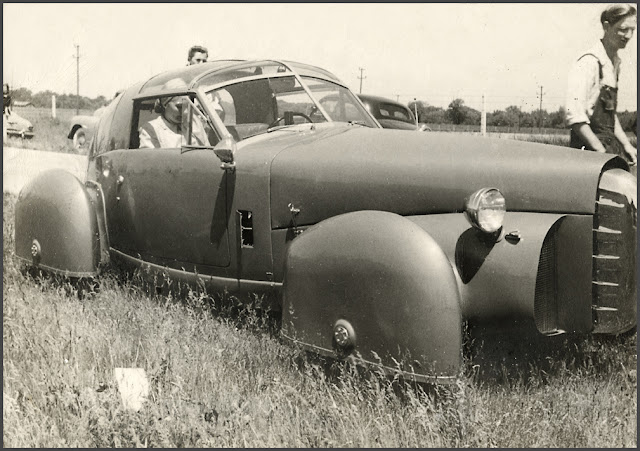 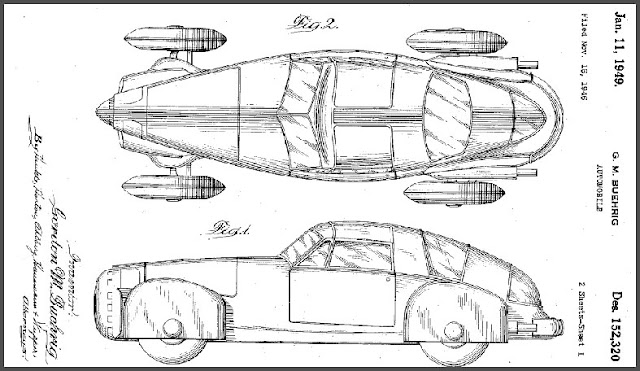 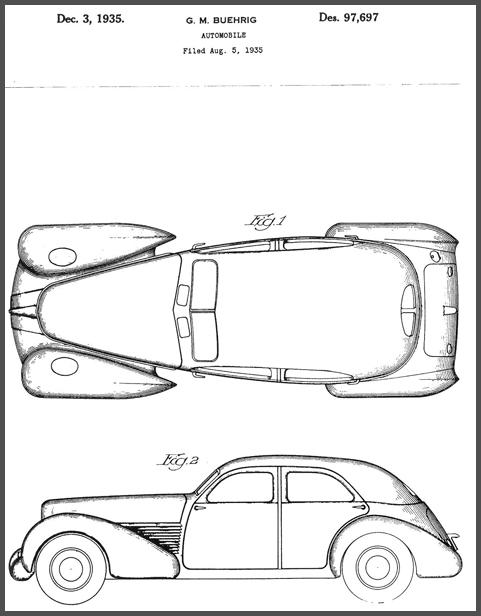 1948 TASCO
Gordon Buehrig's design for an all-American sports car, built by Derham on a reworked 1948 Mercury chassis with Edelbrock dual carb manifold and OHV conversion on its flathead V8. Ten investors contributed $5000 each to the project, initially a sort of king-sized MG TC for the postwar boom. Buehrig argued for a closed cabin, citing parallels in private aircraft where the open cockpit, with its helmets and goggles, noise and windblast, fell from favor after Charles Lindbergh flew solo across the Atlantic in a business suit. When you did want the wind in your hair, you simply removed T-top panels like those introduced on the Corvette twenty years later. One investor's insistence that the fiberglass fenders turn with the front wheels added complication and delay, while essential style markers like disappearing headlights were deleted as funds dwindled. The result was an odd duck that had trouble making friends, with Buehrig eventually deeming the car his personal Edsel (horse collar and all). But its patent drawings lead me to believe the TASCO could have made a very different impression with a little more refinement, i.e. time and money. More Plymouth Prowler, less Eastern Bloc. Here we are in the weeds along a two-lane highway, possibly in Northern Indiana during Buehrig's time in South Bend. Patent drawings from Rolling Sculpture - A Designer And His Work, Gordon M. Buehrig with William S. Jackson. 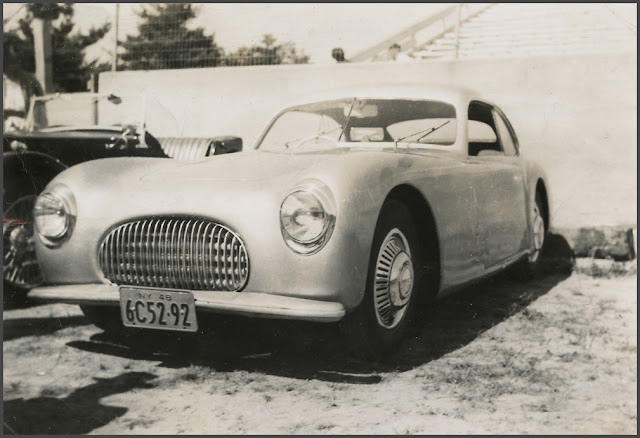 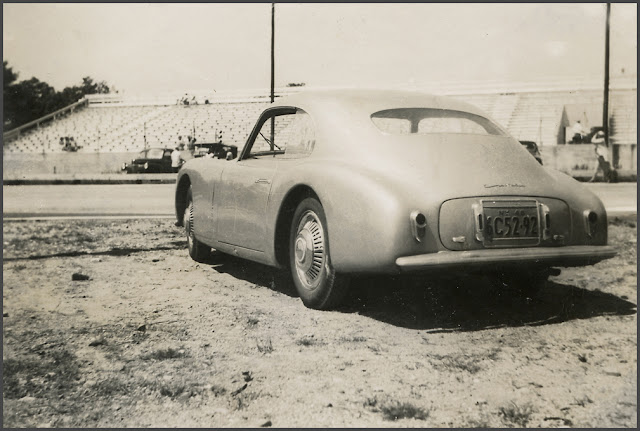 1947-8 Cisitalia 202
The MG TC next space over has a bigger engine, as Pininfarina's template for the modern GT uses a modified Fiat mill of just 1100cc. I saw a ragtop variant at the ACD Museum in Auburn some years ago, glowing a beautiful moss green and roughly the size of a large peanut. Word that it had come from a NASCAR driver made me wonder what kind of ribbing he endured when racing buddies found out his vintage Italian sports car was packing 52hp. But the Cisitalia was a masterful example of the classic fastback GT before there was such a thing, lovingly sculpted, with a baby Buick grille and turbine blade hubcaps that predate turbine blade hubcaps. What would the exclusive Eldorados, Continentals, Adventurers, Furys and Golden Hawks of the mid-fifties have worn without them?

The Cars of Tomorrow 1948
Featuring the Davis, TASCO and Jack Norvell whatsit, a startling creation built in Los Angeles from a Chrysler driveline and various aircraft bits. It appeared in the August 1946 issue of Popular Science, Norvell claiming to have reached 131 mph in testing.
Posted by reservatory at 9:55 PM 0 comments 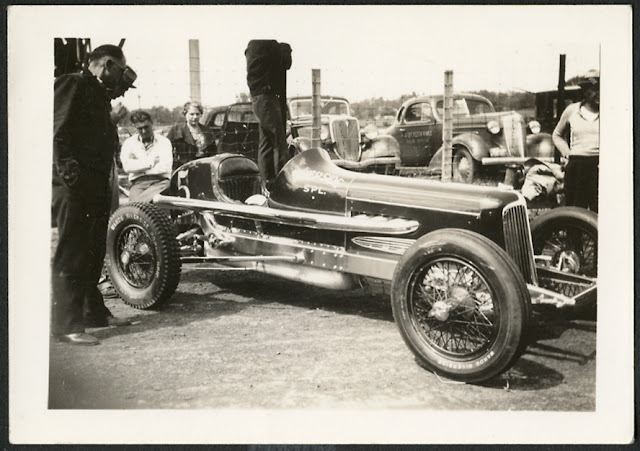 Bankrolled by Hank O'Day, owner of a Charleston, Illinois tavern that featured an open-secret gambling room with slots just up the stairs. From Bob Lawrence's Vintage Auto Racing Web Ring, "O’Day had owned other big cars before he commissioned Louis 'Curley' Wetteroth, a noted racing car chassis builder in Southern California, to build a new 270 cubic inch Offenhauser powered big car over the winter of 1937 and 1938. The creation was white, trimmed in red scallops, and sported a black number 15 on the tail. It had the best of everything and no expense was spared.  Among the unusual extravagances were a chrome frame, chrome running gear, individually chromed spokes in each wheel, a polished aluminum grill and instrument panel. The O’Day Offy was truly a showpiece and the talk of the racing community nationwide before it ever turned a wheel on a racetrack. It was said to have been the most expensive big car ever built, setting O’Day back somewhere in the neighborhood of $20,000. To complete the package, O’Day had a 1938 Diamond-T truck custom built for another $20,000 or so to haul the car around. The truck boasted a partially enclosed bed and sleeping quarters for the crew, rare amenities in the 1930s. O’Day took the car on the road, campaigning it on the American Automobile Association (AAA) Eastern Racing Circuit and in races sanctioned by the Central States Racing Association (CSRA). Johnny McDowell and Joie Chitwood shared driving duties for much of the 1938 racing season, bringing the car home in second place in CSRA points. Early in 1939, Chitwood persuaded track announcer and good friend Jack Story to have Sam Nunis set up sponsorship for the O’Day Offy with Ward’s Riverside Tires. Nunis was the East Coast representative for Riverside and the name “Riverside Special” replaced “O’Day Special” on the car’s cowl." I'm assuming this is the right car. None of the many photos that accompany the borrowed text show the car with vertical grill bars or an exhaust configuration with manifold stacks and tailpipe on one level, nor is there any mention of the car running as #5...
Posted by reservatory at 3:25 AM 0 comments 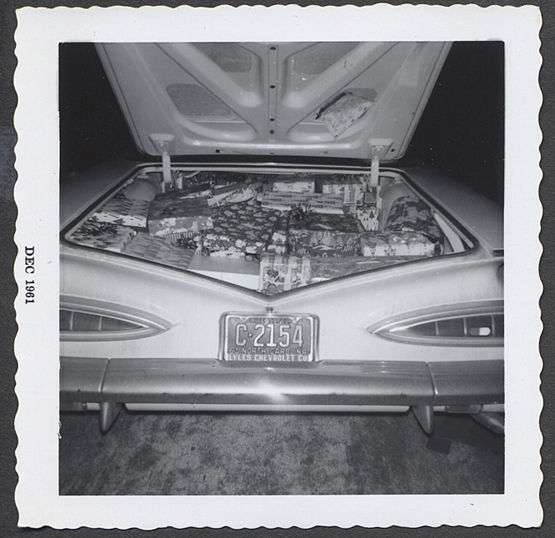 Posted by reservatory at 3:19 AM 0 comments 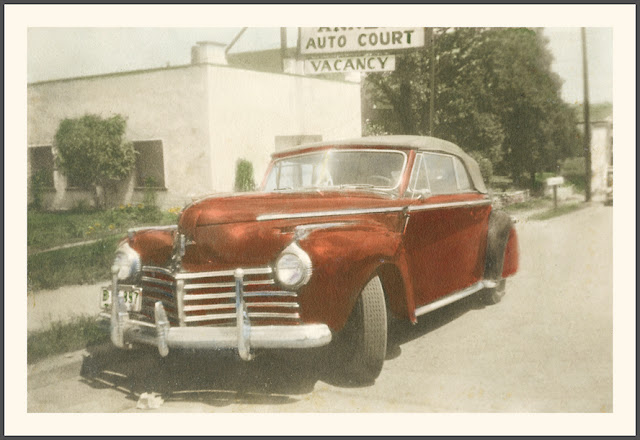 Posted by reservatory at 2:58 AM 0 comments