The largest aircraft of its day, the Dornier Do-X Flugschiff (flying ship) was powered by twelve Curtiss Conqueror V12s mounted back to back on a small auxiliary wing above a 157' X 31' main wing. Built to test the market for a transatlantic luxury liner of the sky, the triple decker's passenger accommodations included sleeping quarters, writing rooms, wet bar, lounge, kitchen and 60 foot dining salon. Cockpit, navigation center, engine control and radio rooms were one level up, with fuel tanks and float chambers filling the basement. Setting out for New York late in 1930 via Portugal, the Canary Islands, Guinea-Bissau, Cape Verde Islands, Brazil, Trinidad, Puerto Rico, Florida, South Carolina and Virginia, there was little question of the craft's major shortcoming - cruising at a little over 100 mph, the 50 ton Do-X burned through 400 gallons of fuel every sixty minutes. Attempts to increase efficiency seem to have included early experiments with air cushion ground effects. As passenger E.C. Gordon wrote of his first take off, "Almost immediately the engines were throttled, and the ship began to lose height, and one was convinced that a landing was going to be made, so close to the water did the ship appear to return, but in actual fact a height was set of ten metres, and at this height we went across the North Sea, for, as Capt. Christiansen said, what is the object of flying high—it only wastes power and fuel. Thirty feet on an ordinary aircraft gives you an impression of being up in the air, but thirty feet in the Do-X makes you feel all the time that the next wave will gently lap against the bottom of the boat." Following a series of mishaps and delays including a three month layup in the Canaries after a tarpaulin fire consumed most of the port side wing, the giant finally splashed down in the Hudson River on 27 August 1931, nearly nine months after departing Friedrichshafen. By this time the engines needed major rebuilds, so the Do-X spent another nine months dry docked at Glenn H. Curtiss Airport (now LaGuardia), where thousands of sightseers paid a quarter each to tour the interior and the featured photo was taken. Although 200,000 cheering Berliners welcomed the flying ship home on 24 May 1932, financially strapped Dornier passed it to Lufthansa, who tried it out along the German coast that summer. A 1933 Vienna-Budapest-Istanbul grand tour ended when the tail section broke off during a botched landing at a reservoir in Lower Bavaria. With the continuing global depression making commercial viability unlikely, the repaired aircraft was decommissioned in 1934, becoming a centerpiece of the Deutsche Luftfahrtsammlung aviation museum, which opened in Lehrter Bahnof in 1936 only to be destroyed in an RAF bombing raid in late November 1943, Do-X and all. Dornier actually built the slightly larger Fiat V12 powered Do-X2 and Do-X3 for SANA, Italy's state airline. Launched in 1931 and 1932, the pair were based at a seaplane station at La Spezia on the Ligurian Sea, destined for luxury service between Genoa and Gibraltar before being requisitioned by the Italian Air Force 'for prestige flights and public spectacles'.

Posted by reservatory at 5:51 PM 0 comments 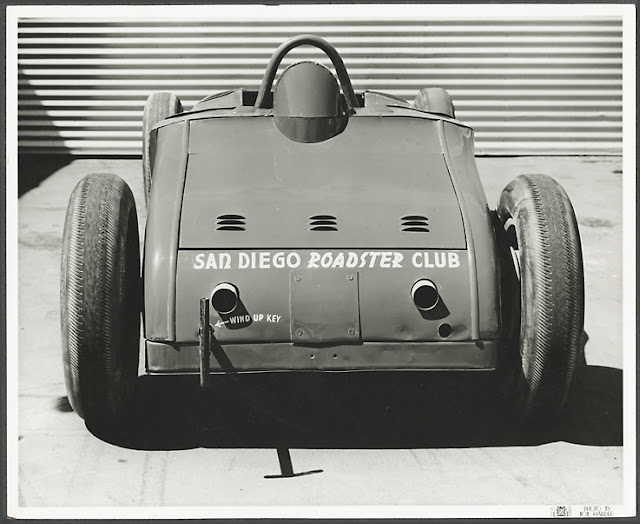 Posted by reservatory at 5:12 PM 0 comments 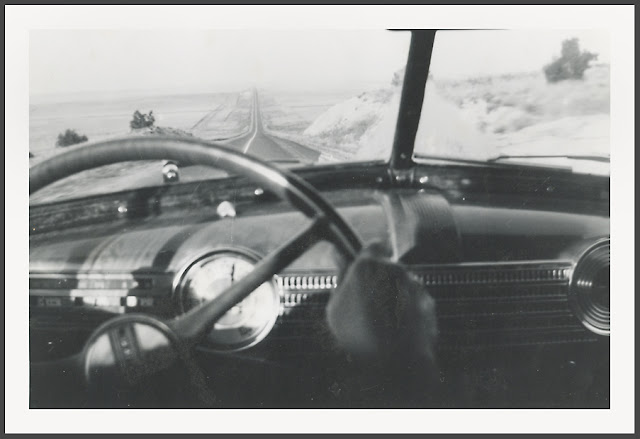 Subject steadies her '41 Chevy against prevailing crosswinds on a lonely stretch of highway somewhere in New Mexico.
Posted by reservatory at 5:05 PM 0 comments